Today is Sunday. Today, I am sharing an article. We like to glorify our military. Most of us veterans don’t want this; we want people to listen to why we can’t allow war with its brutality to seep into our collective conscience as normal.

Silencing Our Veterans: a Bridge Too Far

Today is Thursday. Today, I read a very well written article on a very difficult topic.

If you believe these people deserve what they get, you had better look in the mirror and do a heart check.

I was thinking about Psalm 23 when I created this one.

Tremendous thanks to Karen for the generous gift on Matt’s gofundme.

Today is Sunday. Today, I located some reasonably priced rooms for 3 young people who were recently released from prison.

Gosh! I could do this as a job. It felt good to be able to help those who will otherwise be homeless.

I am hoping these people are given a chance. Life is difficult enough with out the label of “felon” added.

Today, I saw a man with a broken arm and holes in his shoes standing on the side of the road with the familiar cardboard sign. His name is Rodney. I bought him a coffee and gave him some cash. It reminds me that the cold weather is coming and it’s time for the survival bags.

Don’t forget to include socks and mittens. I usually throw a few bags in my car to hand out. The cops can’t harrass you for handing out cash..;)

Today is Saturday. Today, I have re read an article written in 2017 that is more than relevant in 2019.

The U.S. has a mass incarceration problem, and one reason is that it sends people to prison for much longer sentences on average than other countries. 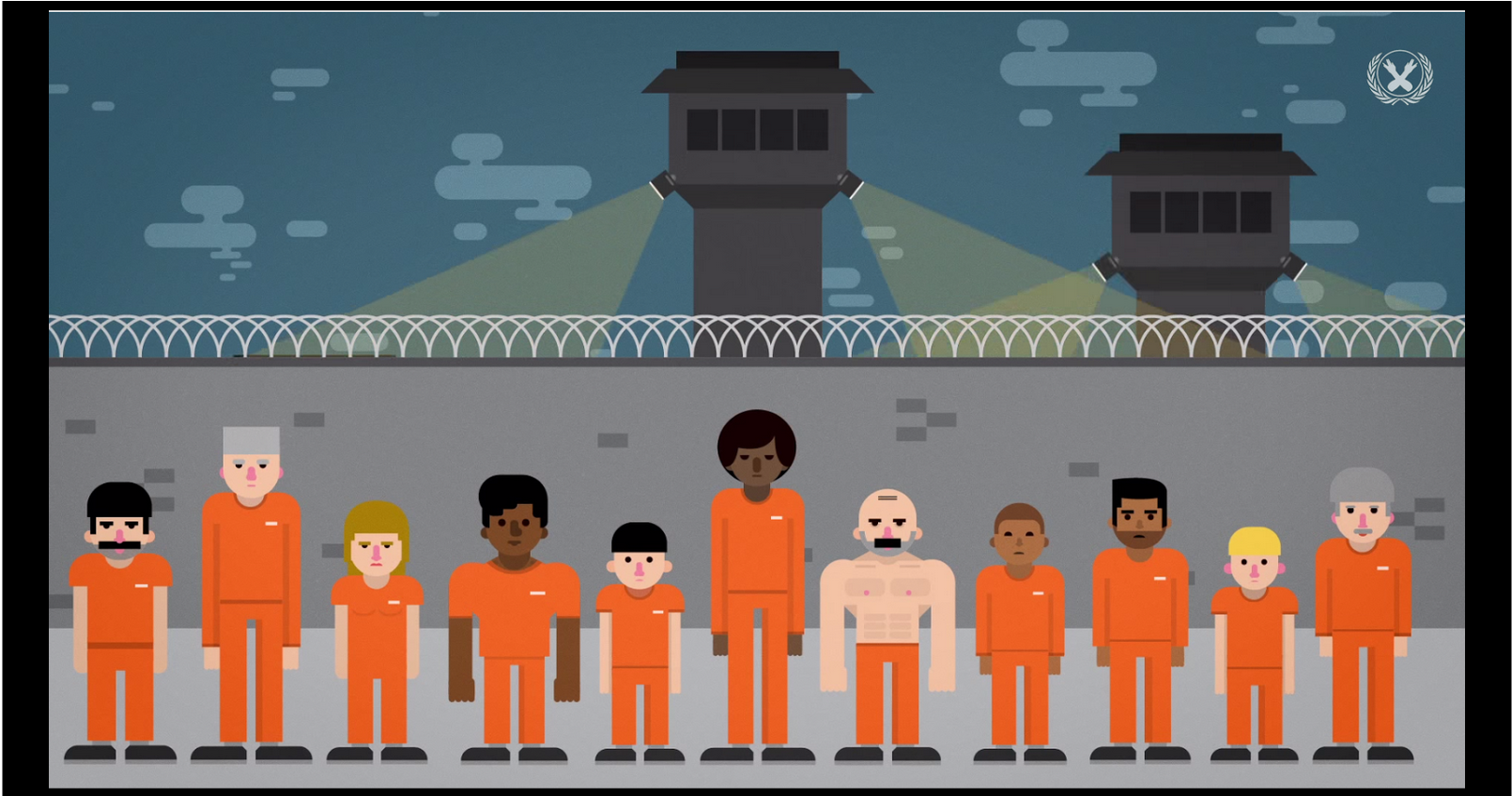 The Justice Policy Institute compared average sentence lengths
in the U.S., the U.K., Australia, and Finland in 2011, and the report
revealed the stark punishment disparity for offenders that commit the
same crimes.

Drug offenders in Australia can expect to serve about
three more months in prison than those in the U.S. But when it comes to
robbery, assault, and fraud convictions, America hands out the longest
average sentences. 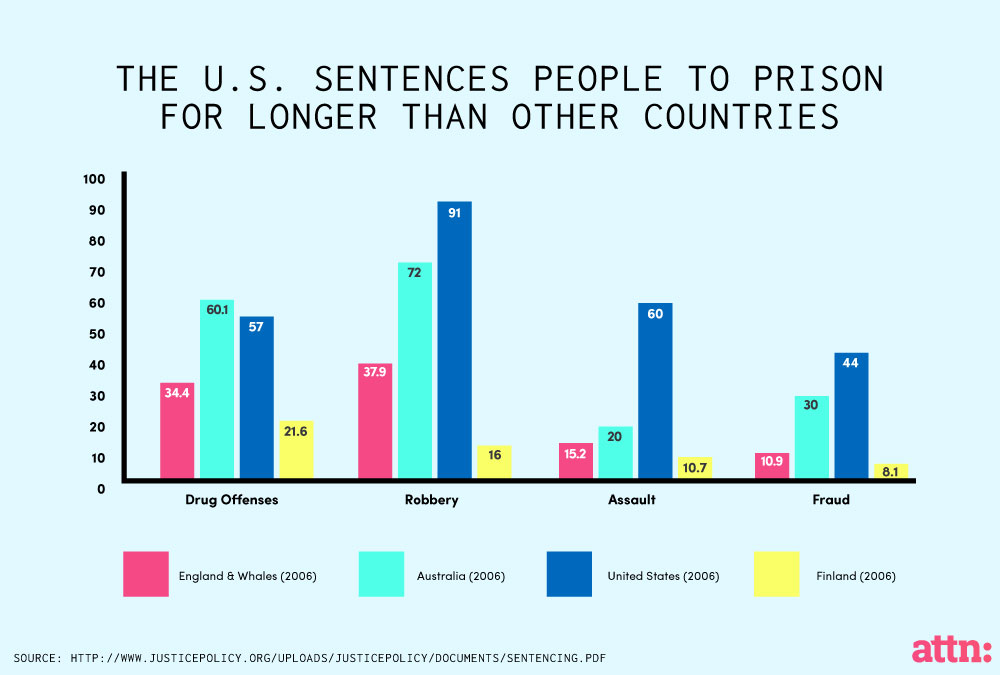 That’s
in spite of the fact that research has turned up little evidence that
imposing longer sentences makes people less likely to re-offend. A 2014 report from the National Research Center also concluded that “lengthy prison sentences are ineffective as a crime control measure.”

“In
terms of deterring crime, research for a long time has told us that the
certainty of punishment is much more effective than the severity of
punishment,” Marc Mauer, executive director of the Sentencing Project,
told ATTN:. “If you can increase the odds that a person will be
apprehended, some people will think twice about what they’re doing,
whereas increasing the amount of punishment that’s imposed — most people
don’t think they’re going to be apprehended, whether it’s shoplifting
or murder, so they’re not particularly thinking about the severity of
punishment that might take place.”

“So the longer sentences buy us very little in terms of determent,” Mauer added.

What longer sentences are associated with, however, are larger prison populations. 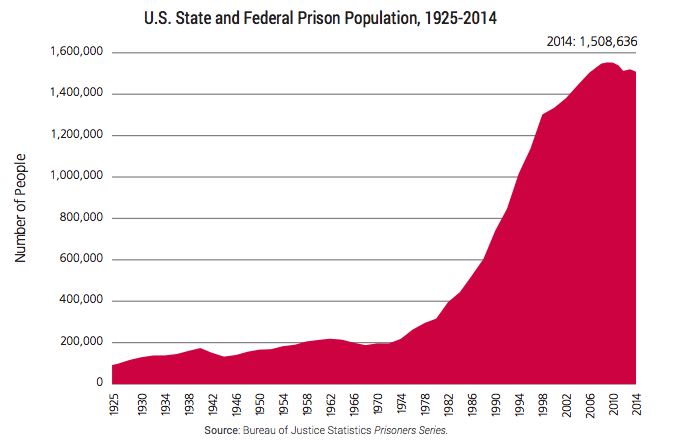 Sentencing Project – sentencingproject.orgSentencing Project – sentencingproject.org
President Barack Obama made sentencing reform a key part of his criminal justice agenda, signing the 2010 Fair Sentencing Act,
for example, which reduced the mandatory minimum sentencing disparity
for those convicted of crack cocaine and powder cocaine offenses. It
also removed the mandatory minimum sentence for possession of crack
cocaine. The president has also commuted the sentences of more than 1,300 federal inmates (mostly nonviolent drug offenders) as of Tuesday.

But these reform efforts have done little to reduce the overall prison population in the U.S.

Harsh
sentences imposed on drug offenders during the Drug War era have put
tens of thousands of Americans behind bars in state and federal prisons.
And lengthy sentences for most violent and nonviolent crimes haven’t
budged in recent years.

Today is Friday. Today, I began researching housing options for some young people coming out of prison and having no place to live.

Keep me in your thoughts and prayers.

Today is Thursday. I have missed a few days. I apologize for the delay.

Today, I would like to talk about peacemakers. A very nasty and hateful comment was made on my blog regarding “warmongering.”

First of all, the person who made the comment totally missed the point. Then went on to attack my son and me.

I have observed that most people when seeing a fight will usually add sticks to the fire. For whatever reason, conflict is in our DNA.

Unusual is the person, who steps in and tries to mediate, tries to diffuse the situation. Let’s be honest, it’s a risk.

When was the last time we saw our leaders try to negotiate, talk, show peaceful intent? It’s always using bravado, threats, sanctions and the like.

We tend to rubberneck instead of taking steps to stand up for peace.

I know some people may not agree with me and that is seriously okay.

But, if you are going to be vicious and play the troll, do us both a favor and walk away.

Humanity not Commodity
Blog at WordPress.com.